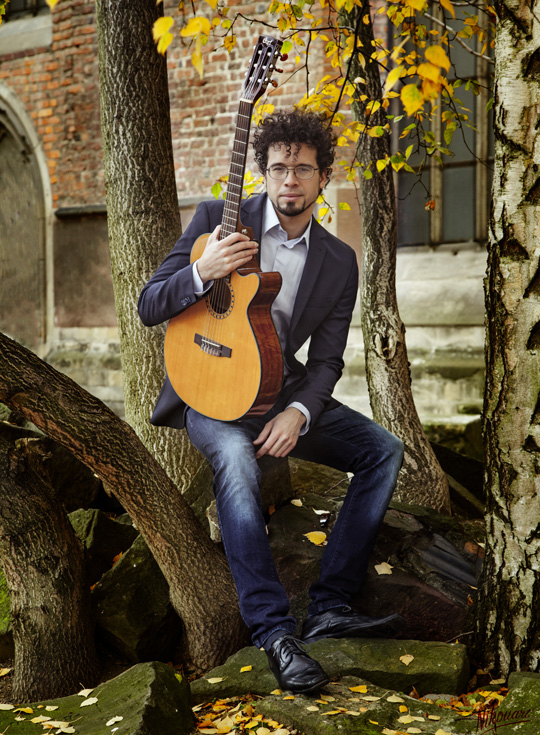 Initiator of the integration project

Very early it became already apparent that music will not only determine the private life of Emilio M. Padrón, but also his professional career. With 10 years he entered at the music school “Manuel Saumell” in Havana to perfect his guitar playing. From 2001 he attended the Conservatory “Amadeo Roldán”, also in Havana, where he graduated with the double degree of “Music teacher” and “Instrumentalist” (specialization on Tres Cubano). Afterwards he attended the “Superior Art Institute of Cuba” (ISA) at the University Havana, where he graduated as one of the best, with a Gold Title on Tres Cubano.

Emilio M. Padrón has gained over 10 years of experience as a professional musician in Cuba as well as in different countries of Europe (Portugal, Austria, Poland). Since more than 4 years he works at the Torres Art Studio in Breslau/Poland. His main instrument is the guitar. Furthermore, he also plays different plucked instruments such as the lute, the Venezuelan cuatro, the Tres Cubano, the mandolin, the baroque guitar, the zither and the electric guitar. This enables him to present a wide musical range of styles, such as classical music, jazz, blues, folk music, rock or Latin American music. As a music teacher he worked in Cuba as well as in Poland and animated different conferences and workshops.

He has been distinguished several times for his musical acknowledge, particularly by winning twice the award of the National Contest Festival “Plectro Havana” in Cuba, in 2007 and 2009. In 2020 he participated on the international composition contest for guitar and madolin orchestra in Luxemburg and won the second prize.

Emilio M. Padrón understands music no only as art, but also as a language of communication between peoples and cultures.

He is currently part of the plucked instruments orchestra „Mandolinata Karlsruhe“ – in the group of the mandola – and teaching the guitar at the Clara-Schumann-Musikschule in Baden-Baden as well as at the Städtische Musikschule und Musikakademie Germersheim.

Publish modules to the "offcanvs" position.